South Korean activists floated balloons carrying tens of thousands of anti-Pyongyang leaflets into North Korea on Monday, eluding police who had disrupted an earlier launch attempt due to threats from North Korea.

South Korean police, citing security concerns, had sent hundreds of officers Monday to seal off roads and prevent the activists and other people from gathering at an announced launch site near the border. Before taking action, the South Korean government had implored activists to stop their campaign, but had cited freedom of speech in not making further attempts to intervene. Residents in the area were also asked to evacuate to underground facilities, according to local official Kim Jin-a.

Some of the activists, mostly North Korean defectors, simply moved to another site near the border that was not guarded by police and carried out the launch of the balloons.

South Korean activists have in the past sent leaflets across the border, and North Korea has issued similar threats to attack without following through. But this time South Korea detected that North Korea had uncovered artillery muzzle covers and deployed troops to artillery positions in possible preparation for an attack. Yonhap cited no source for the information.

“We could not delay our plans to send anti-North Korea leaflets because it is our love toward our northern brothers,” the activists wrote in a statement posted on the website of Seoul-based Free North Korea Radio, one of civic organizations involved in the leafleting.

On Monday, the top U.S. envoy on North Korea urged Pyongyang to stop issuing destabilizing threats. “It is grossly disproportionate to have threatened to respond to balloons with bombs,” Glyn Davies told reporters in Beijing after meeting with Chinese officials. 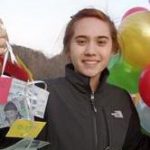