Another US citizen sentenced to prison in North Korea

North Korea has sentenced an ethnic Korean citizen of the United States to 10 years in prison.

Kim Dong Chul had been detained in the North on suspicion of engaging in spying and stealing state secrets. He was sentenced to prison after a brief trial in Pyongyang on Friday.

Kim’s sentencing comes on the heels of a 15-year sentence handed down on Otto Warmbier, an American university student who the North says was engaged in anti-state activities while visiting the country as a tourist earlier this year.

A complicated memory of life in North Korea 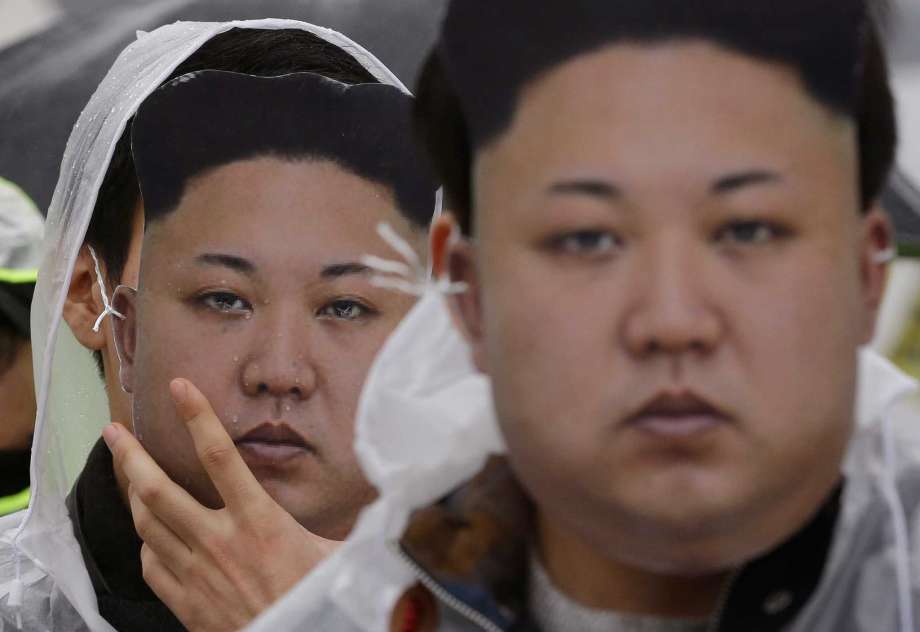 In this file photo taken on Feb. 12, 2016 in Seoul, North Korean defectors wearing masks of North Korean leader Kim Jong Un attend a South Korean rally against North Korea’s rocket launch and nuclear test. For tens of thousands of defectors scattered across South Korea and living underground in China, it’s a complicated memory of their home they left behind.

Why it’s nukes over food priority in North Korea

North Korea’s recent actions suggest that their nuclear aspirations supersede the immediate needs of its citizens. While its people go without the most basic day-to-day needs, the North Korean government continues to invest 25 percent of its GDP on military spending and it’s the only country to engage in nuclear detonations in the 21st century, despite mounting international pressure.

Although North Korea’s observed policy to choose its military over food might seem illogical, the rationale for this stance lies in their history. A look at North Korea’s struggle for sovereignty provides context as to why it is Nuclear weapons are a core pillar of the reclusive country’s culture and protection against foreign interests.

For a country with a long history of suffering under imperialism, nuclear weapons are seen as the deterrent that ensures its independence. Kim Il Sung, the first president of the Democratic People’s Republic of Korea, pursued the prestige of nuclear power and its potential to preserve the country’s independence. Even during the widespread starvation of the 1990s, North Korea refused to give up its nuclear program. Kim Jong Il (Il Sung’s son and successor) turned these nuclear dreams into a reality, with the first successful detonation in 2006. Under Kim Jong Un, North Korea’s current supreme leader, the desire for nuclear weapons continues to take priority over the people’s well-being.

Even though North Korea’s nuclear dreams create a humanitarian nightmare for its citizens, nuclear aspirations are rooted deep within the North Korean psyche. One North Korean told NK News, “Our nation may still be poor. But we can be one of the most powerful and influential nations in the sense of national defense.”

North Korea said on Wednesday its ruling Workers’ Party would hold a congress beginning May 6, ending its silence on the date of the first such conference in 36 years.

North Korea’s last party congress was in 1980, before current leader Kim Jong Un was born. Kim, the third member of his family to lead the country, is believed to be 33.

Kim Jong Un is expected to use the congress to cement his leadership and to formally adopt his policy, known as “byongjin”, to push simultaneously for economic development and nuclear weapons capability. Byongjin follows Kim’s father’s Songun, or “military first”, policy and his grandfather’s Juche, the North’s home-grown founding ideology that combines Marxism and extreme nationalism.

The party congress, first announced in October, will be closely watched for any new policies and for how the country will present its pursuit of nuclear-weapon capability. South Korea  and others are nervously watching the North’s defiance of UN resolutions aimed at curbing its nuclear and ballistic missile technologies, expect another test within days.

The United States is readying a “shield” to protect itself from “low-level” threats from North Korea, which has conducted multiple nuclear and ballistic missile tests this year, according to President Obama.

“One of the things that we have been doing is spending a lot more time positioning our missile development systems, so that even as we try to resolve the underlying problem of nuclear development inside of North Korea, we’re also setting up a shield that can at least block the relatively low-level threats that they’re posing now,” Obama said in an interview with “CBS News” that aired Tuesday.

The comments suggest the U.S. is moving ahead with plans to deploy a new missile defense system in South Korea.

American diplomats have tried to assuage Chinese concerns about the system. South Korea is a regional rival and Beijing is worried it would pose a threat to Chinese national security.

But Obama said the U.S. does not want to take any chances with “erratic” North Korea and its leader, Kim Jong-un, whom he described as “personally irresponsible.”

“North Korea is a massive challenge,” Obama said. “They are erratic enough — their leader is personally irresponsible enough — that we don’t want them getting close,” he continued. “But it’s not something that lends itself toward an easy solution.”

North Korea’s foreign minister defended the jailing of University of Virginia student Otto Warmbier for alleged anti-state activities but said Saturday that he would inform authorities in Pyongyang there is concern in the U.S. for the student, and noted other detainees have been released before serving their full sentences.

North Korea’s highest court sentenced Warmbier, 21, to 15 years in prison after he confessed he tried to steal a propaganda banner as a trophy.

The U.S. government condemned the sentence, accusing North Korea of using such American detainees as political pawns. Foreign Minister Ri Su Yong countered that the student was being used by Washington to create internal disturbances.

Ri said North Korea has let previous detainees leave the country. “I will let the corresponding authorities know when I go back to Pyongyang that you are … very much interested in how he is doing.”

On Sunday North Korea’s foreign minister Ri Su Yong had told the Associated Press his country was willing to halt its nuclear tests if the U.S. suspended its annual joint military exercises with South Korea. “If we continue on this path of confrontation, this will lead to very catastrophic results, not only for the two countries but for the whole entire world as well,” he said. “It is really crucial for the United States government to withdraw its hostile policy against the DPRK and as an expression of this stop the military exercises, war exercises, in the Korean Peninsula. Then we will respond likewise.”

President Barack Obama responded the U.S. won’t back down from strengthening its military alliances and defenses against North Korea until the country “shows seriousness” toward eliminating nuclear weapons from the Korean peninsula.

The recent mass defection of 13 North Korean restaurant workers is a humiliating blow to the Pyongyang leadership. Especially because it was apparently allowed by China, North Korea’s most powerful ally and trading partner. In the past, China has sent defectors back to North Korea.

In an April 11 press conference, Chinese Ministry of Foreign Affairs spokesman Lu Kang made the unusual move of commenting publicly about the case. “After an investigation, 13 [North Korean] citizens were found exiting the Chinese border with valid passports on the early morning of April 6. It is worth noting that these people all had valid identity documents with them and exited the Chinese border in accordance with law,” he said.

Many analysts believe China’s actions could be a sign of increased tension between Pyongyang and Beijing. Supreme Leader Kim Jong Un’s government faces growing isolation and heightened sanctions over its nuclear and missile programs. Ongoing allegations of widespread human rights abuse made by the United Nations Commission on Human Rights continue to infuriate North Korean leadership.

Pyongyang has responded to mounting global pressure with a series of provocative shows of force. Observers believe Kim is trying to project strength, both domestically and internationally, ahead of the crucial Worker’s Party Congress next month, when the young leader is expected to consolidate his power. South Korean government intelligence indicates a fifth North Korean nuclear test could be in the works ahead of that major political gathering.

North Korea on Thursday issued two reports through its official media calling on South Korea to return a group of 13 defectors who fled from a North Korean restaurant in China earlier this month.

The Korean Central News Agency quoted an unnamed spokesman from North Korea’s Red Cross Society as saying the families of the 12 women from the group “are earnestly asking for direct contact with them as early as possible,” adding that “what we want is to let the daughters meet their parents and directly clarify their stand.”

The report from KCNA described the incident as “abduction,” and demanded an apology from South Korea. China confirmed that the group had left China legally and with valid passports.

A second report, issued by KCNA the same day, carried a statement from a spokesman, again unnamed, from the Central Committee of the Kim Il Sung Socialist Youth League, which claimed the case of the defectors was engineered for political purposes ahead of that country’s general election days later. (President Park Geun-hye’s Saenuri Party lost its majority in the April 13 poll.)

LiNK and liberty for North Koreans

Liberty in North Korea (LiNK) is a Los Angeles-based NGO that works with North Korean refugees. Since it was founded in 2004, LiNK has shepherded more than 400 North Koreans through China and Southeast Asia to South Korea and the United States, where defectors can claim political asylum.

Sokeel Park, LiNK‘s director of research and strategy, makes it clear that his organization does not do “extractions” — meaning they don’t arrange for people inside North Korea to make it out. Instead, LiNK works with refugees who have already fled, or gets “referrals” from defectors who have kept in contact with relatives via smuggled cellphones or other means and know an escape is coming.

With China and North Korea both seeking to arrest defectors — and potentially the people who aid in their escapes — Park says “operational security” is crucial, so the first step upon meeting refugees is vetting. After LiNK feels comfortable the defector is not an agent of the North Korean regime, the organization makes arrangements to smuggle the person from China’s northeastern frontier to a third country, typically in Southeast Asia.

In years past, defectors could simply enter a US embassy or consulate in China and be guaranteed protection. Getting out of the diplomatic outpost and moving on to the next destination required approval from the Chinese government, however, and Beijing began forcing refugees to wait months or years before allowing them to continue on their way. China also cracked down by beefing up security outside the compounds to make it more difficult to get inside.

LiNK has a history of success when it comes to helping defectors escape — Park says their success rate is over 95 percent — but there are no guarantees.