Posted on February 18, 2014 by Grant Montgomery

Kim Kwang-il, 48, spent more than two years at a prison in North Korea where he was tortured, starved and witnessed the deaths of fellow inmates. Kim is one of the North Koreans who gave evidence in public hearings for the United Nations Commission of Inquiry on Human Rights in North Korea.

The UN on Tuesday released a damning report on North Korea’s inhumane treatment of prisoners, likening it to Nazi-era atrocities. It includes the testimony from more than 300 North Koreans, many of whom gave their evidence in secret.

Mr Kim was arrested by North Korean police in mid-2004 and charged with illegally crossing the border and smuggling. He had crossed the border to sell pine nuts. For this he was sentenced to six years in prison.

He defected to South Korea in February 2009 where he published a book about his time in detention. The book contained drawings made by professional artists based on his recollections of the torture he was subjected to and some of the horrific scenes he witnessed. One such drawing and description follows. 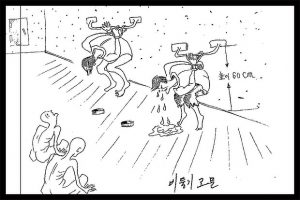 Description of illustration: “This position itself is the torture. And additionally you are beaten up as well. If you did not give the right statement during the preliminary hearing, you get this kind of torture. You are beaten up, which leads to vomiting because you feel very uncomfortable inside. Sometimes you would vomit blood. … I was told to be in that position until my sweat would fill that one glass, that glass in front of me. You will never imagine what that’s like. … We are bound to stay in that position until the jailer feels that you have been tortured enough. …This is the pigeon torture. Your hands are bound back and if they tie you like this, your chest comes out forward and in this position you are tortured.”

You can read the testimony of Kim Kwang-il in full, along with the report itself on the UN website.