Posted on December 10, 2013 by Grant Montgomery 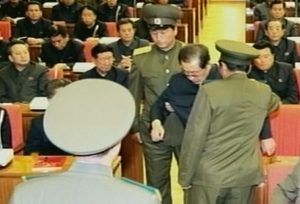 An extraordinary photo published by the official KCNA news agency on Monday, showing Jang being unceremoniously escorted from a Communist Party meeting by two armed guards, left no doubt that he had become persona non grata.

The recent, very public ouster of North Korea’s Jang has been noted with some concern in China, which is more or less Pyongyang’s only friend in the region. As significant as such a high-level shakeup might seem inside reclusive North Korea, The New York Times says “nowhere is the downfall more unnerving than in China.”

“Despite Chinese irritation with North Korea’s nuclear tests and other bellicose behavior, China had built a good relationship with Mr. Jang as the trusted adult who would monitor Mr. Kim, who is less than half his age.”

“While there is no indication that the Chinese intend to change their view, it seemed clear that even Beijing’s top leaders were surprised by Mr. Jang’s abrupt downfall.”

Time writes: “Jang was once seen as a regent to the young dictator [Kim Jong Un]. He also had strong patronage networks of his own, and within the ultraconservative halls of North Korean power was seen as something of a liberal. He visited Seoul in 2002 and has made several official trips to China, most recently in August 2012.”

He was also reportedly a supporter of Chinese-style economic reforms, according to The Associated Press.

India’s The Hindustan Times points out that Beijing’s unease with the changed dynamics at the top of the government in Pyongyang were reflected in an editorial in the state-run nationalist tabloid, the Global Times, on Tuesday. “As Jang was viewed as the second-most powerful figure and is North Korean leader Kim Jong-Un’s uncle, this announcement is considered a significant political event,” it said.