Kim Jong-un’s willingness to get closer to his people

Posted on November 6, 2012 by Grant Montgomery 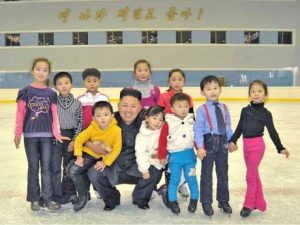 North Korean leader Kim Jong-un shows an unaccustomed informality – in contrast to his father’s practice of only posing at mass rallies – as he is photographed with a group of children during a visit to an ice rink in Pyongyang.

Apparently Kim even took to the ice himself,with a cohort of officials in tow. This certainly seems to indicate a new willingness to get closer to his people.

The above image was released by the official Korean Central News Agency today, and published in The Independent.


This entry was posted in Kim Jong Un by Grant Montgomery.