A ‘balloon warrior’ subverts North Korea, thousands of leaflets at a time

Lee Min-bok’s house, fashioned out of two shipping containers, is monitored by 12 police surveillance cameras. Dogs woof at any stranger walking up the dirt path. Plainclothes detectives check his mailbox and tag along wherever he goes to protect him from possible assassins sent by North Korea, which openly threatens to kill him. 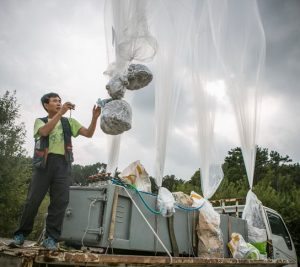 On days when the wind blows to the north, Mr. Lee, 59, ventures out with his secondhand five-ton truck, hauling a large hydrogen tank to the border with North Korea, an hour’s drive away. There, he fills dozens of 23-foot and 39-foot barrel-shaped balloons with the gas and lets them drift away.

His leaflets list the number of cars and other figures from South Korea’s vastly superior economy. It then asks North Koreans to ask ethnic Koreans from China, who often visit their country, whether those figures are correct. It also urges them to ask front-line soldiers to confirm that the South Korean fences on the border are awash with blinding lights at night while the energy-starved North is buried in darkness.

Sailing 9,800 to 16,400 feet above sea level, Mr. Lee’s balloons waft across the world’s most heavily guarded border, high enough that North Korean soldiers have little chance of shooting them down. Then his patented “timer” devices click, unfastening vinyl bundles. Leaflets fall out like snowflakes over the North, where Mr. Kim struggles to keep his people under a total information blackout, blocking the internet and prefixing all radio and TV sets to receive only his government’s propaganda-filled broadcasts.

In South Korea, there are 50 “balloon warriors,” many of them defectors from the North like Mr. Lee, who seek to breach the wall with leaflets. Mr. Lee is their godfather. When he started floating large balloons in 2005, with others following suit, he received credit — and blame — for reigniting the leaflet battle. Lee launches between 700 and 1,500 balloons a year, each carrying 30,000 to 60,000 leaflets.

Sending balloons is Mr. Lee’s full-time job. He finances his operation with cash he earns from lectures he gives at churches and elsewhere. Christians also donate, asking him to drop small Bibles and food into the North. A Japanese group contributes with the understanding he will send leaflets urging North Koreans to help find the whereabouts of dozens of Japanese believed to have been abducted to the North.

In 2011, a man was arrested on a charge of plotting to assassinate a balloon activist at the behest of North Korea. Three years later, the North directed anti-aircraft fire into the South Korean sky, trying to down one of Mr. Lee’s balloons. This year, it began retaliating in kind, floating to the South leaflets that called President Park Geun-hye a snake and a prostitute.