When North Korean defector Choi Sung-Guk decided it was time to go public with his experiences, he avoided the well-trodden “harrowing memoir” route in favor of a cartoon strip.

Drawing skills and some online space provided Choi with everything he needed to reach a young Korean-speaking audience that might otherwise have little attention to spare for a 36-year-old escapee from over the border. Choi, who spent eight years making cartoons at a Pyongyang animation studio, now posts a weekly online comic strip, or webtoon, on South Korea’s largest internet portal, Naver. 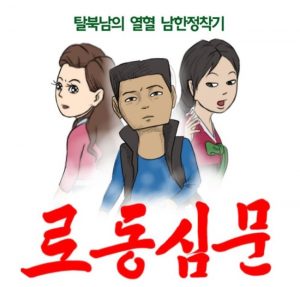 The strip is called Rodong Simmun (Labor Interrogation) — a play on the name of the North Korean ruling party’s official mouthpiece Rodong Sinmun (Labor Newspaper) — and details the struggles of North Korean defectors adapting to life in the capitalist South. A lot of the material is based on Choi’s own experiences since arriving in Seoul as a 30-year-old defector in 2010.

Choi only started posting his strips in May and, in what is a crowded and highly-competitive field, they are already averaging around 20,000 views and garnering fawning reviews from a growing number of South Korean fans. The YouTube channel also has Korean subscribers living overseas in countries like the United States.