Posted on August 6, 2014 by Grant Montgomery

A Vancouver couple detained in China for the “theft of state secrets” may have triggered an investigation for something as innocuous as posting photos online of a view from their balcony overlooking a river bordering North Korea, according to experts. 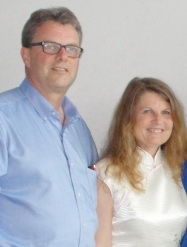 Before they were detained Monday night, Kevin Garratt, 54, and Julia Dawn Garratt, 53, uploaded images on Facebook and Instagram of their life in Dandong, including pictures taken from their apartment looking out onto the Yalu River and the Friendship Bridge, which brings trade between China and North Korea.

The Garratts have been living and working across China for the last 30 years, moving to Dandong in 2008 to open up Peter’s Coffee House: a popular hangout for expats and locals looking to improve their English, marketed as “the perfect stopoff while en route to or returning from the Hermit Kingdom.”

“They’ve been there for so long now,” Kevin’s father Ross said Tuesday afternoon from his home in Innisfil, Ont. “Originally they wanted to go there to help people; they were sponsored by different church groups who wanted somebody over there to help run orphanages.”

Their real passion became delivering aid to impoverished North Koreans on either side of the sensitive border through an evangelical Christian organization.

“We’re China-based, North Korea-focused, but we’re Jesus-centered,” Kevin said in a November 2013 guest sermon at Surrey’s Terra Nova Church. In a recording of the sermon — which has since been removed from the church’s website — he described running a house outside Dandong where North Koreans could “hang out.”

Kevin said he used an organization called North Star Aid, which serves the people of North Korea by providing humanitarian aid, according to its website.

A short statement on the China’s state-run Xinhua News Agency after the couple’s detention Monday night made no mention of their aid work but reported they “are under investigation for suspected theft of state secrets about China’s military and national defense research.”

This entry was posted in China, Humanitarian Aid and Relief by Grant Montgomery.