Charles, a North Korean defector now living in the US

Posted on November 9, 2018 by Grant Montgomery 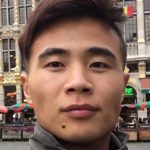 My name is Charles. I was born in North Korea on October 1st, 1994. My father left us when I was five years old and my mother passed away six years later from starvation. For years, I had to figure out how to live alone. I begged for food from strangers on the street, battling starvation and freezing weather.

One day my stepbrother came to find me and take me in. I lived with him for a while and when I was 14 years old he brought me to my father in China. Life was so much better in China and I remember thinking there would be no more starvation and no more begging for a place to sleep. Yet nine months later, the Chinese police came to our house and arrested my family.

We were kept in a Chinese jail for two weeks. At age 16 I was sent back to North Korea where I was detained. Each meal consisted of a single piece of corn. After eight months, I was finally released. I was just skin and bones – I had almost starved to death.

I began working in a coal mine which allowed me to buy rice to eat. Work in the coal mine was very risky — I saw people lose their arms and legs as they were smashed under the rocks. I was afraid and I couldn’t help thinking that I would soon lose an arm or a leg myself. After working in the mine for a year, I realized I couldn’t stay in North Korea any longer. My journey began when I boarded a train to take me closer to the border of China and North Korea. I was riding illegally and though I managed to hide during most of the ride I was at one point caught by the train security without my birth certificate. They locked me in a room with plans to kick me off at the next stop. As the train slowed, I realized that I might be able to escape through the window. I walked for hours, illegally boarded a second train, and then, finally, I was at the border of China and North Korea.

I knew I had to cross the Tumen River. I hid in tall grass for six hours, waiting for darkness. Finally, I took a deep breath and stepped into the water. Suddenly, I felt a light on my head. A border guard screamed, “Come back here or we’ll shoot you.” I was terrified, and I thought I would never make it because the current kept pulling me under, but I just kept swimming. At last, I made it to the river’s shore.

My journey did not end when I got to China. I traveled by foot, van, bus, motorcycle, and boat. My shoes fell apart and my feet bruised and bled. I went for days without food and water and there were times when I wanted to give up. I cried many days until I couldn’t cry anymore because I was too dehydrated. When I made it to my father’s house, I expected him to welcome me, but he beat me and asked me why I had come to him. I saw that he did not want me!

I escaped the eyes of many police officers and finally made it to Southeast Asia where I was safe. For months I stayed in a Korean Embassy refugee camp and then an international refugee camp where I was finally helped to come to the United States.