Kenneth Bae, the American citizen sentenced to 15 years in a North Korean labor camp, has been moved to a hospital after a serious deterioration in his health, his sister said.

Detained in North Korea in November and sentenced in April for “hostile acts to bring down its government,” Bae is now suffering from severe back and leg pain and has lost more than 50 pounds, his sister Terri Chung told CNN late Sunday.

Chung said she received the information from the U.S. State Department, which told her the Swedish ambassador to North Korea had visited Bae in the hospital on Friday. Sweden represents U.S. interests in North Korea because the United States has no diplomatic presence in the secretive state. 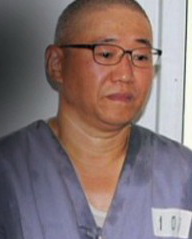 Detention in North Korea has taken a heavy toll on Bae, who has already been dealing with other health problems, including diabetes. In a video released early last month, Bae had stated, “Although my health is not good, I am being patient and coping well,” his head shaved and face noticeably thinner than in earlier photos. in that interview, he spoke of health problems including diabetes, high blood pressure, fatty liver and a back problem.

“I think the last three months in the labor camp have certainly been very trying on both his mental and physical health,” Chung said by phone from the Seattle area. The eight hours per day of farm labor, which Bae had never done before, appear to have worsened his symptoms, she said, adding that “he’s also under a tremendous amount of stress.” Other problems he’s suffering from include kidney stones, dizziness, blurred vision and loss of vision.

The family is “extremely concerned” about the situation and is pleading with the U.S. government to help Bae’s case, Chung said.

North Korea has so far showed no sign of budging on the case of Bae, who they call Pae Jun Ho, his Korean name.

One reference to “Deteriorating Kenneth Bae moved to hospital”