Posted on October 4, 2017 by Grant Montgomery 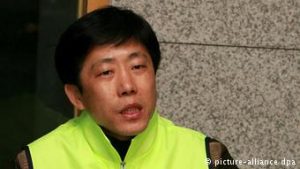 Park Sang Hak is a slender man with nervous looks, and generally jittery about sharing his whereabouts.

Park Sang Hak’s worries about threats to his life are not farfetched. Six years ago, a North Korean refugee had arranged a meeting with the activist. The two were supposed to meet in broad daylight at a busy intersection. But when he was on his way to the meeting, Park received a phone call from the South Korean intelligence, informing him that the person he was going to meet had been arrested. A sympathizer of the North Korean regime, the alleged refugee was carrying deadly poison, concealed as a ballpoint pen. He was promised around $10,000 for carrying out the assassination and Pyongyang is suspected to be behind the attempt. Park has continued to receive death threats, also targeting his wife and son.

The threats have not deterred Park Sang Hak from pursuing his radical propaganda campaign against Pyongyang. The activist packs flyers, books and transistor radios into specially prepared, cigar-shaped balloons – and flies them across the heavily-militarized border into North Korea. Nothing scares the Kim regime more than a free flow of information to its isolated people.

Activist Park is convinced that his flyers save lives. 20 years ago, he himself came across one – sent as part of the South Korean military’s psychological warfare campaign. A student of electrical engineering in Pyongyang at the time, Park learned for the first time about the notorious internment camps run by his country’s leadership. Park himself had no reason to flee at that time. He came from a privileged family; his father was among the few people in the country who even owned imported Mercedes cars.

After defecting and making it to Seoul, Park could have led a comfortable life there as an intellectual, but in 2003 a refugee from his hometown told him about the fate of Park’s remaining relatives. “My two uncles had been tortured and they died as a result; my fiancée was terribly mutilated; my cousin disappeared without a trace,” said Park. It marked the start of his radical activism, to which he says he has devoted the rest of his life.