Posted on January 3, 2015 by Grant Montgomery

The sister of North Korean leader Kim Jong Un has married the son of one of the country’s most powerful officials, Yonhap news agency reported on Friday, citing unnamed sources. 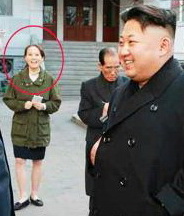 Kim Yo Jong, who is 27 or 28, was said by state media late last year to have assumed a senior position in the ruling Workers’ Party. She is the only other member of the ruling Kim family known to have an official job within the government.

“As far as I know, Kim Yo Jong, deputy director of the Workers’ Party, got married to a son of the party secretary Choe Ryong Hae,” the South Korean news agency quoted a China-based source as saying.

The senior Choe is a high-ranking member of the ruling Workers’ Party widely seen as a close confidant of Kim, the isolated country’s third-generation leader.

Kim Yo Jong was seen wearing what appears to be a wedding ring in a photo released by the reclusive North’s official KCNA news agency on Friday.