Kim Jong Un has his generals in stitches

North Korea’s dictator Kim Jong Un seemed a world away from worry as he visited a fish food factory, amid reports of a shrinking economy and a UN ban on the import of luxury goods.

The autocratic leader laughed and joked with his generals as he was taken around the factory, at an undisclosed location, earlier this week. His inspection of the food manufacturing plant is just the latest in a series of factory visits, which are used as propaganda to portray the communist leader’s interest in state industry, according to the BBC. 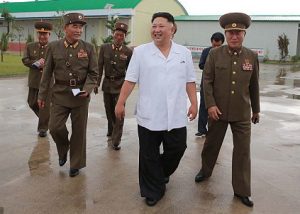 Despite Kim’s jocularity however, the leader has been dealt a huge blow as the Swiss government imposed a ban on the export of luxury watches to North Korea, according to the US-backed Radio Free Asia. The Supreme Leader has long been fan of the country’s expensive timepieces.