After vanishing from the public eye for nearly six weeks, North Korean leader Kim Jong Un is back. 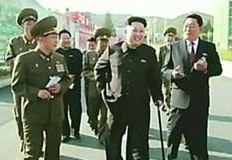 Now, a new, albeit smaller, mystery has emerged: Why the cane?

Kim, who was last seen publicly at a Sept. 3 concert, appeared in images released by state media Tuesday smiling broadly and supporting himself with a walking stick while touring the newly built Wisong Scientists Residential District and another new institute in Pyongyang.

A South Korean analyst, Cheong Seong-chang, said Kim probably broke his media silence to dispel outside speculation that he wasn’t in control and to win sympathy from a domestic audience by creating the image of a leader who works through pain.

It was the first time a North Korean leader allowed himself to be seen relying on a cane or crutch, South Korean officials said.

Archive footage from August showed him overweight and limping, prompting the South Korean media to speculate he had undergone surgery on his ankles.

Cheong said Kim appeared in the recently released images to have lost about 10 kilograms (22 pounds) compared to pictures from May. He speculated that since Kim was holding a cane on his left side he may have had surgery on his left ankle.