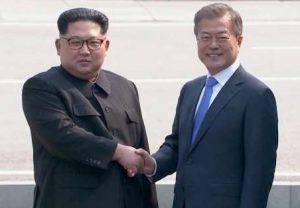 The leaders of North and South Korea embraced on Friday and pledged to work for the “complete denuclearization of the Korean peninsula” on a day of smiles and handshakes at the first inter-Korean summit in more than a decade.

The two Koreas announced they would work with the United States and China this year to declare an official end to the 1950s Korean War and establish a permanent peace agreement, removing an important vestige of the conflict.

“The two leaders declare before our people of 80 million and the entire world there will be no more war on the Korean peninsula and a new age of peace has begun,” the two sides said.

But their commitments were short on specifics and failed to clear up key questions about Pyongyang’s intentions over its nuclear arsenal ahead of an even more critical summit, with U.S. President Donald Trump, that is expected in coming weeks.