Last two Americans held captive by North Korea back in US

Posted on November 9, 2014 by Grant Montgomery

Kenneth Bae and Matthew Miller landed Saturday night at a Washington state military base after a top U.S. intelligence official secured their release from the reclusive Communist country. 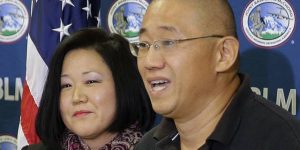 Bae, surrounded by family members, spoke briefly to the media after the plane carrying him and Miller landed about 9 p.m. He had been serving a 15-year sentence for alleged anti-government activities. He was detained in 2012.

“I just want to say thank you all for supporting me and standing by me,” he said.

“It’s been an amazing two years, I learned a lot, I grew a lot, I lost a lot of weight,” said Bae, a Korean-American missionary with health problems. Asked how he was feeling, he said, “I’m recovering at this time.”

His family has said he suffers from diabetes, an enlarged heart, liver problems and back pain.

Miller was serving a six-year jail term on charges of espionage after he allegedly ripped up his tourist visa at Pyongyang’s airport in April and demanded asylum. North Korea said Miller had wanted to experience prison life so that he could secretly investigate North Korea’s human rights situation.

U.S. officials said Miller of Bakersfield, California, and Bae of Lynnwood, Washington, flew back with James Clapper, the director of national intelligence. Clapper is the highest-ranking American to visit Pyongyang in more than a decade.