Posted on December 18, 2012 by Grant Montgomery 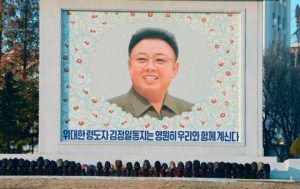 North Korea unveiled the embalmed body of Kim Jong Il, still in his trademark khaki jumpsuit, on the anniversary of his death as mourning mixed with pride over a recent satellite launch that was a long-held goal of the late authoritarian leader.

In the Kumsusan mausoleum, a cavernous former presidential palace, Kim Jong Il was presented lying beneath a red blanket, a spotlight shining on his face in a room suffused in red. Wails echoed through the chilly hall as a group of North Korean women sobbed into the sashes of their traditional Korean dresses as they bowed before his body.

North Korea also unveiled Kim’s yacht and his armored train carriage, where he is said to have died. Among the personal belongings featured in the mausoleum are the parka, sunglasses and pointy platform shoes he famously wore in the last decades of his life. A MacBook Pro lay open on his desk.

At a memorial service on Sunday, North Korea’s top leadership not only eulogized Kim Jong Il, but also praised his son. Kim Yong Nam, president of the Presidium of North Korea’s parliament, called the recent rocket launch a “shining victory” and an emblem of the promise that lies ahead with Kim Jong Un in power.