37-year-old cartoonist Choi Sung-guk explains, “In North Korea, I worked at an animation company, making local versions of The Lion King, Titanic, etc. …I was under surveillance for copying and distributing South Korean movies in the North when I decided to flee in 2010.

“I actually sent out my family first – my mother, sister and my nephew – to China because I was worried. However, after they left, I was arrested and sent to a detention center for six months. I manage to flee the country myself after that detention period was over.

“My trip to South Korea was short and easy. I fled to China, then Laos and then to Thailand before arriving in South Korea. All in 15 days.

“I started working as a program developer and web designer after arriving here [in South Korea]. But I was always interested in comics and cartoons. What I saw here was really boring, so I took up working at a broadcasting network, as a radio jockey and also a journalist and that’s when I started to understand the South Korean society.

“I also realized the cultural differences between the two Koreas and how people had different attitudes towards unification. 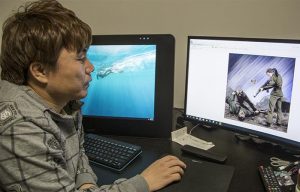 “And that’s why I started my webtoon three years ago and help towards reducing the cultural gap. Through my art work, I want to teach people the differences and the similarities we have. I also want to dispel the prejudice the youth has about unification. Sometimes, I will include historical stuff or academic information in order to get people to understand why it is that North and South Koreans are different.”