Lee Min-bok lives in a small hut near the Korean Demilitarized Zone and regularly sends satchels with thousands of anti-Kim Jong-un flyers to North Korea via cylindrical 7-metre-tall hot-air balloons. 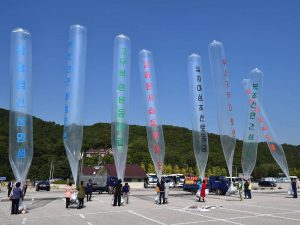 To time his deliveries perfectly, he studies satellite weather data on his laptop. The 57-year-old defector has been launching roughly 50 million leaflets a year for the past decade and believes that his propaganda is the best way of achieving peace between the two nations, rather than official negotiations.

“My balloons are the way to achieve peace and unification and tell North Koreans the truth – not to hate the United States and South Korea,” he said.

The leaflet drops have long angered Pyongyang, which has frequently threatened to attack the continued deliveries. Yet it was only until last Friday that North Korea responded, firing machine guns at one of Lee’s balloons that had crossed the border. Some of the bullets landed in the South, forcing retaliatory fire.

On October 4, three senior officials from North Korea made a surprise visit to the South, with a follow-up round of talks set to take place in late October or early November. However, North Korea’s state KCNA news agency said such negotiations were being stymied by Lee’s propaganda, which it called “a premeditated and deliberate politically-motivated provocation perpetrated under the backstage wire-pulling of the U.S. and the South Korean authorities”.