North Korean defector: “Do not let others’ thoughts rule over you.”

Posted on September 18, 2017 by Grant Montgomery

Hak Min grew up in Onsong, a town near the Chinese border. It was images of the world outside of North Korea, picked up on TV signals from China and bootleg videotapes and DVDs that sparked his desire to escape.

The risks of watching these shows were very real. Hak Min was caught with DVDs and sentenced to prison, where he and his friends were tortured. He eventually raised money to pay a black market broker to help him get across the border to China, and from there made his way to Thailand and eventually South Korea.

When Kim Hak Min lived in North Korea, every home prominently displayed a photo of the isolated nation’s founder, Kim Il Sung, as well as his son and successor, Kim Jong Il. 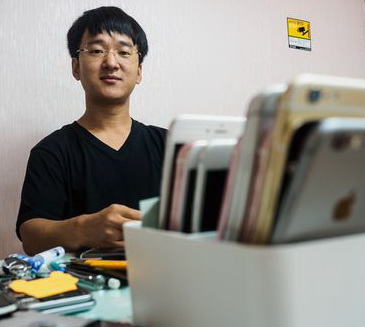 Now, having successfully defected and running his own iPhone repair shop in the bustling South Korean capital, the 30-year-old defector has hung a very different portrait on the wall: Apple icon Steve Jobs.

Hak Min was given a biography of Jobs when he escaped to South Korea in 2013, and the late Apple founder became a hero to him.  “When they brainwash students in North Korea they say: ‘We can read your words, actions and thoughts,’” he said. “If you have bad thoughts about the Kim family they will know.

“But,” he continues, “In his book, Jobs said: Do not let others’ thoughts rule over you. Do what you want. Be yourself.”

For Hak Min, the dream is to finish his engineering studies in Seoul and make his way to California’s Silicon Valley to invent world-changing products of his own.