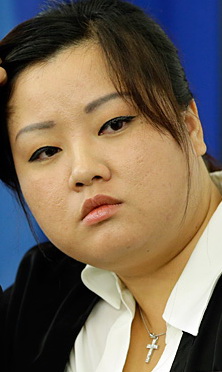 Her father was tortured in detention in North Korea and died. Her elder sister went searching for food during the great famine of the 1990s, only to be trafficked to China. Her two younger brothers died of starvation, one of them a baby without milk whose life ebbed away in her arms.

Jin is one of two defectors testifying at the public hearing at John Hopkins School of Advanced International Studies. The three-member panel has received evidence from dozens of others during hearings in South Korea, Japan and Britain.

Jin, 26, who has lived in the United States since 2008 and runs a charity for North Korean defectors, scoffed at the suggestion that the food shortages were due to natural causes, claiming that government officials drive BMWs and drink exotic whiskies while children die. She recalled how the shortages became very serious in 1996 and she would return from school feeling dizzy from hunger. Her parents made clandestine trips north to China to get food. But her father was arrested and, according to a fellow detainee, was beaten and killed, although authorities claimed he was shot trying to escape.

The family’s fortunes only got worse. In 1998, after Jin’s elder sister went missing, her mother went to China to try and locate the sister. Jin, then age 10, was left with her grandmother and two younger siblings to care for their newly born brother. Because of the father’s previous arrest, she said, the family was shunned by neighbors when they begged for food.

“My baby brother died in my arms because we had nothing to eat. Because I was holding him so much he thought that I was his mom, so when I was feeding him water he was sometimes looking at me, smiling,” Jin said, weeping.

She said her grandmother and her 5-year-old brother also starved. The remaining family members fled to China, but were arrested several times and repatriated before finally gaining asylum in March 2008 with the help of Christian missionaries.