Posted on October 9, 2015 by Grant Montgomery 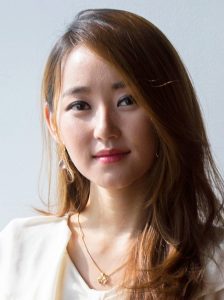 Yeonmi Park is smart. She speaks three languages (Korean, Mandarin, English) and is the co-author of a new book, In Order to Live, with Maryanne Vollers. Park has rubbed elbows with Hillary Clinton, addressed the United Nations, recently moved to New York and experienced culture shock of a Martian-fallen-to-Earth magnitude since escaping to China in 2007.

“I didn’t know how to order a coffee,” she says. “People would ask me about my hobbies and what I liked. I had never been asked those questions. …  I didn’t know what a hobby was.”

“My life was about surviving.” In North Korea, survival meant food. “In North Korea I thought a frozen potato was the fanciest food in the world.”

She isn’t sure how she feels about love. She dreams of meeting someone and having a baby, but trust is an issue. Park escaped to China with her mother at age 13 only to be betrayed by human smugglers. Her first memory of China is of witnessing her mother’s rape. Her mother was then sold for $65. Park fetched $265 because she was a virgin — and 13 — and was passed around from trafficker to trafficker until one made her an offer: if she became his mistress, he would reunite her with her family, who are now in South Korea.

“He was married,” she says. “His daughter was a year younger than me. I thought maybe if I sacrificed myself I could do something for my family. I was raped. But he kept his word. He brought my mother back to me.”

Park tries to stay emotionally detached when she speaks of the past. It helps her to tell her story, but because it is not a story, but her life, the traumas lurk just beneath her polished, attractive and articulate surface. Indeed. Park didn’t cry during our 50-minute interview. But she wept afterwards, heaving and sobbing, before apologizing for losing control.

“I feel guilty,” she says. “I love North Korea, but not the regime. It is my country, but it is far away, another universe.”