Kim Jong-nam has lived in sumptuously-funded exile in China, Macau and Singapore for years since he fell from favor. 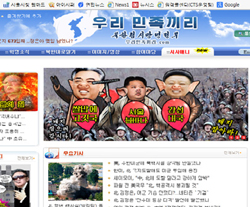 The tongue-in-cheek petition appears on a website with the same name as the North Korean propaganda site Uriminzokkiri. The website, which has one more “k” than the North Korean version in its URL, created a corner gathering signatures to support a takeover by Kim Jong-nam. It hails him as the “eldest son and true heir of the Baekdu blood” — a reference to nation founder Kim Il-sung’s alleged birthplace.

The website also praises Kim Jong-nam’s courage for criticizing the hereditary transfer of power from Kim Jong-il to his third son Jong-un, which he described as “a joke to the outside world.”

The website’s creator, who gave his name as Chung, said the petition is slightly mischievous. “Our purpose is to deal a blow to the Kim Jong-un regime by stressing the need for reforms, rather than actually getting Kim Jong-nam to become the new leader.” Chung added he wants to use humor to inform more young South Koreans what is actually happening in the North.