It’s a scene more often associated with the likes of Justin Bieber or Harry Styles, but it appears it’s not just good-looking pop stars that get mobbed by screaming females as they walk down the street.

Earlier this week, it was the unlikely figure of North Korean despot Kim Jong-un who was set upon by adoring crowds of women as he toured a mushroom farm in the country. 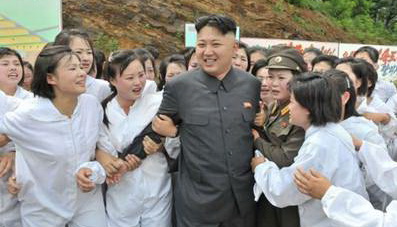 In a photograph released by the state-controlled Central News Agency, a smiling Kim Jong-un is seen surrounded by a large group of women wearing white boiler suits.

Many of the women, who are assumed to be workers on the mushroom farm, are seen crying with joy as the dictator is led through the crowd by a stern-looking female soldier.