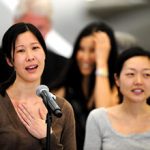 
This entry was posted in Humanitarian Aid and Relief, North Korean refugee by Grant Montgomery.

One reference to “North Korean refugee operation endangered by US reporters”