Posted on February 13, 2018 by Grant Montgomery

The North Korean cheerleaders have arrived. The presence at the Winter Olympics of the all-female squad of cheerleaders — 229 strong, as part of the larger North Korean delegation — has been politically charged, provoking divided reactions among spectators at the Games and those watching from afar. 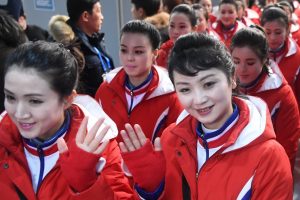 The cheerleaders have been praised as human olive branches, a preliminary way to ease tensions during the current nuclear crises. They have been criticized as singing, dancing spearheads of a strategic North Korean propaganda campaign at the Games.

In this very public bubble, they have been the source of endless, intense curiosity. And in their sheer numbers and with the surreal scenes they have created, they have garnered a level of attention — in competition venues and in the news media — that would make most Olympic athletes envious.

Han Seo-hee, 35, a North Korean defector to the South, who was picked to be a cheerleader 16 years ago, said squad members were drawn from various performance troupes around the capital. She said many, herself included, belonged to a band associated with the Ministry of People’s Security, a national law enforcement agency, which she joined after high school. Though it was not a year-round job, the women could be called in for months of full-time training before a major event.

Han explained the selection criteria: “Those who are well assimilated to the North Korean regime, those who are exemplars of working collectively, those who are from the right families, and of course those who meet the height and age standards,” she said.

“The countries have been divided for so long, and it’s my first time seeing people from the North, so it’s cool,” said Yoon Jin-ha, 16, a student from Seoul attending the game on Monday with her mother. Referring to a growing indifference toward reunification among younger South Koreans, she added, “We think that unification is not that important of a thing, but being this close to them tonight has made me really understand that we are the same people.”

“They look very pretty,” said Hyun Myeong-Hwa, 58, of Cheongju, South Korea, who filmed the women. But she had mixed feelings, too. For a moment she rubbernecked like everyone else. “I do understand the negative criticisms about them being here,” she added. “But I think we should be positive and open-minded about them. We are the same people.”