Posted on November 7, 2018 by Grant Montgomery

North Korea has unveiled what’s thought to be the first official painting of Kim Jong-un, lifting the leader to a new level of personality cult. 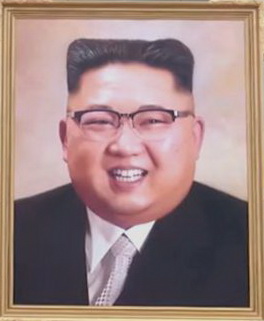 The huge new picture was on display during a visit by Cuba’s president. The new larger-than-life artwork shows him smiling, looking slightly to his left, while wearing a Western style suit and tie.

“That a painted portrait of Kim Jong-un has appeared in this style is a strong hint that the regime could be beginning to take steps to develop the Kim Jong-un personality cult,” Oliver Hotham, managing editor with NK News, told the BBC.

The style of the painting is so evocative of the ever-present portraits of the older Kims, that “North Koreans will certainly understand the symbolism of this move”. Symbolism and imagery are all-important in North Korea: portraits of Kim Jong-un’s father and grandfather portraits hang in every building in the country.

“Everything that’s happened in 2018 has also worked to solidify his image,” says Mr Hotham. “Eight summit with foreign heads of state have been a delight for Pyongyang’s propagandists, helping them paint the leader as an internationally respected statesmen on par with Xi Jinping and Donald Trump.”

Whether Kim Jong-un’s official portrait will indeed become a propaganda staple like the portraits of the father and grandfather remains to be seen.