Two needy men are using each other to maintain their own fantasies about themselves. The fantasy of one of them is that he is justified in his role as the “supreme leader” of a military reign of totalitarian fear over nearly 25 million people. The much less dangerous fantasy of the other is that he’s still a star. Which raises the question: is there a force on earth more strange, sad and frightening than the human ego in full spate?

It’s easy to see what Kim Jong Un is getting out of the relationship. He was obsessed with US basketball as a child, and has been a long-standing admirer of Rodman. The fact that he can persuade this man to visit, to declare to the world that they are friends, to sing him happy birthday, to defend his grisly human rights record, can only be gratifying to his monstrous, childish, grotesquely swollen sense of self. No doubt, he will believe – probably with some justification – that an association with this famous American will only burnish him in the eyes of the population. The state propaganda machine is certainly doing its best to help with that, by supplying fawning headlines describing Rodman’s great admiration and respect for Kim.

Rodman’s own propaganda is not going so well. Presumably, he enjoys the publicity these trips afford him, even though it’s all negative. One can only assume that Rodman is able to ignore everything except the personal kick he must get from his association with Kim. Rodman, on these trips, is being feted by a world leader and treated as a visitor of immense importance, even if that world leader is despicable. How terrible to have such a craving for personal validation and flattery that you can dismiss in your search for it the suffering of an entire population and the disapprobation of the rest of the world. 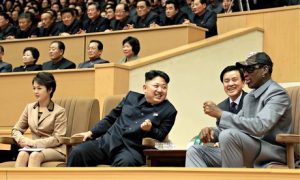 There are many reasons why Rodman’s friendship with Kim is laughable, and all of them revolve around the idea of Rodman’s absurdity, as a trusting creature who is proud to have been selected to polish the crocodile’s teeth. Rodman longs for the days when he was at the center of a personality cult, and it has made him vulnerable. It has delivered him into the hands of a man who heads his own, far more sinister personality cult.

This strange relationship, this folie a deux, between a hereditary dictator and a world-famous sportsman, is almost poignant in its revelation of the emptiness and dysfunctionality that is so often at the root of a search for power and acclaim.

[Deborah Orr, writing in The Guardian]

This entry was posted in Kim Jong Un, Uncategorized by Grant Montgomery.

One thought on “Rodman and Kim Jong Un – Ego or diplomacy?”