No less than US Navy Adm. Samuel Locklear, the commander of U.S. Pacific Command, went on record stating that North Korea’s Kim Jong Un is at the top of the worst offenders list.

America’s top officer in the region expressed grave concerns Thursday about how the U.S. charts a path toward the untested and reclusive despot. 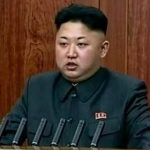 “The young leader, for me…is unpredictable,” said Navy Adm. Samuel Locklear, the commander of U.S. Pacific Command. “His behavior, at least in the way it’s reported and the way we see it in sense, would make me wonder whether or not he is always in the rational decision-making mode or not. And this is a problem.”

“The way ahead with the new leader there is not clear to me,” he said at a Pentagon press briefing. “It is potentially a very dangerous place.”


This entry was posted in Kim Jong Un by Grant Montgomery.