In July 2012, Kenji Fujimoto answered the invitation to return to Pyongyang, where he met Dear’s Leader’s heir, Kim Jong-un.

Cynics say Fujimoto returned to North Korea because the Japanese media had grown tired of his decade-old stories; by risking his life with a return, he’d be able to once again command large interview fees.

Fujimoto says he simply wanted to make good on his word. 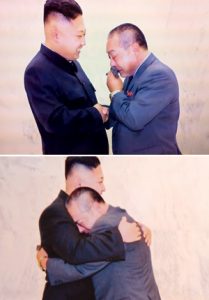 Fujimoto greeted Kim Jong-un with “The betrayer has returned.” Sobbing, Fujimoto dropped to his knees. Kim beckoned him to rise, and the cover image of Fujimoto’s book about the trip shows him weeping, locked in a bear hug with North Korea’s new leader.

Fujimoto was assigned an interpreter and a valet for the event—a lavish banquet that Fujimoto cannot quite remember.

As the party progressed, Kim Jong-un, taking a cue from his father, challenged Fujimoto to a drinking contest. The sushi chef, now 65, drank until he blacked out. He woke later to discover that he was in a guesthouse, in bed, with his clothes removed. He called to his valet, who was sitting in a chair in the dark.

“Did I embarrass myself?” Fujimoto asked him.

“No,” the valet assured him.