Posted on by Grant Montgomery
4 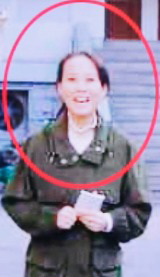 The younger sister of North Korean leader Kim Jong-Un has made an official debut of sorts. Kim Yo-Jong, believed to be 26, accompanied her elder brother to a polling station on Sunday when North Korea held stage-managed elections to its rubber stamp parliament.

It was not her first appearance. She was shown on state television in 2011, tearfully standing next to Kim Jong-Un as they attended the funeral of their father and former ruler Kim Jong-Il.

Since then she has occasionally been seen accompanying her brother on his “field guidance trips”.

Sunday’s outing was different as she was, for the first time, officially listed by her name and as a “senior official” attending the voting function along with several top party and army luminaries.

Ahn Chan-Il, head of Seoul-based World Institute for North Korea Studies, said Kim Yo-Jong was being groomed to play the same supporting role as her very influential aunt. “Kim Jong-Un and Kim Yo-Jong will work in a similar way as their father and Kim Kyong-Hui did in securing the future of the Kim dynasty,” Ahn said.