Posted on December 13, 2018 by Grant Montgomery

Dating had never been easy for Kim Jeong-soon. In her native North Korea, couples holding hands were chastised for “disturbing public order”, and when she arrived in South Korea potential suitors were often repelled by the mere fact of the country of her birth.

It was with a certain reservation, then, that she went on a blind date witha South Korean man three years ago. They dined on fried chicken and beer and launched right into conversations about marriage, divorce and what a future together might look like. “South Korean men are more attentive and considerate compared with North Korean men, and they’re also more friendly,” Kim said.

Six months after that first date they were married. Not only was it a cause for celebration for them, it was another success story for the woman who arranged their meeting. Han Yoo-jin has helped about 300 couples marry since she started her matchmaking company  four years ago. Amid a skewed gender ratio,cultural differences and a desire among many North Korean refugees for a sense of security in their adopted home, an industry has sprung up catering for lonely South Korean men and North Korean women interested in marriage.

Han’s own relationship makes her the literal poster child for her business. After three failed escape attempts, – each time receiving increasingly harsh punishments in one of the North’s infamous labor camps – Han arrived in South Korea in 2001. She worked as a highway toll collector and then in a string of matchmaking firms before striking out on her own. She met her South Korean husband at a party for prospective clients, and photos of the twoon their wedding day fill her company’s website. Her service is part matchmaker, part therapist because frequently mediates conflicts between couples, sometimes even after their wedding.

Hong Seung-woo, another matchmaker, says the divorce rate among North-South couples is about 5%, lower than the South Korean national average. But the industry has its problems, not least the fact that in the south suspicion ofNorth Koreans still remains. She is confident that her business will endure despite the proliferation of apps such as Tinder. “North Korean refugees prefer handling things face-to-face,” she said, adding that most were deeply skeptical of technology, and concerned about revealing even mundane personal details online.

South Korean Unification Ministry spokesman Jeong Joo-hee said on Wednesday North Korean diplomat Thae Yong Ho defected for the sake of his family and because he was “tired of Kim Jong Un’s regime.”

Liberty in North Korea (LINK) Director of Research and Strategy Sokeel Park said the defection of the senior North Korean diplomat  was a “unique situation,” and could lead to threats of retaliation from North Korea.

“There’s been those kind of things that have happened in the past for very high level defectors: assassination attempts, death threats … there will be protection from the South Korean authorities around this person, especially [in] the short term,” Park said.

Park said it was unusual the diplomat had been with his entire immediate family overseas when he was posted. “That’s quite rare … a lot of the time there will be a son or an immediate family member that’s still back in North Korea kind of as collateral to make it harder for people to defect,” he said.

Posted on January 7, 2015 by Grant Montgomery

In the northeastern Chinese city of Shenyang, you’ll find businesses owned and operated by the North Korean government.

“It’s easy for them to work secretly. It also has great Internet infrastructure,” says Kim Heung-kwang, a former Pyongyang computer science professor who escaped North Korea in 2004. Kim says some of his own students became cyber warriors for the hacker network. “By day, they worked regular jobs. But the rest of the time, they were acting on orders from Pyongyang,” he says.

Kim claims North Korean hackers operated secretly in Shenyang for years, moving from location to location to conceal their whereabouts and activities. “Bureau 121 began its large-scale operation in China in 2005. It was established in the late 90s,” Kim says.

“Team members entered China separately — in smaller groups — 20 members at a time,” he says. “When they entered China, they came under different titles. For example an office worker, an official with a trade company or even as a diplomatic staffer.”

Long before North Korea had its own Internet, it dialed in to servers in Shenyang, in Liaoning Province, in the country’s north. Today, nearly all of North Korea’s Internet traffic is still routed through China.

Kim says the operation in China scaled back considerably a few years ago, when North Korea expanded its high speed Internet access. But he believes hackers are still operating in Shenyang.

“North Korea does have illicit activities in China,” says Steve Sin, a terrorism expert at the University of Maryland and former U.S. military intelligence analyst. Sin wrote a report naming Shenyang as a North Korean hacker hub. “It has the location, security, as well as infrastructure,” Sin says.

North Korean markets with women at the helm

Five North Koreans visiting China spoke to NPR recently, offering a rare insight into how political dictates have had an extraordinary social impact in their own homes. All of them count among the elite, who have enough money to enter China legally and hope to return to their families North Korea.

“In the past, our husbands would bring home rations, and we’d live off that,” says Mrs. Kim. “Now there are no rations, and the women support the families. If we don’t make money, they starve, so life is hard for women.”

Facing a catastrophic famine in the mid-1990s, the state had reduced — and then mostly stopped — giving out the rations, known as the Public Distribution System.

By then, markets had sprung up illegally to keep people alive, and have thrived despite the state’s numerous attempts to roll them back. The government had imposed a welter of restrictions on market activity, including forbidding anyone except older women from market trading. Those restrictions have largely been relaxed recently.

Most women trade in the markets, orjangmadang. Mrs. Kim gets up at 4:30 each morning to feed the animals she sells, and also brews alcohol illegally. Every minute of the day is spent figuring out how to feed her family, including an adult son and daughter whose state-run jobs do not provide enough to live on.

For almost half of North Korean families, private trading forms the only source of income, according to research done by American academics at the Peterson Institute for International Economics.

A report by Freedom House concludes that the North Korean prison camps breach almost every definition of crimes against humanity under modern international law.

“The phenomena of repression associated with the political prison camp system of (North Korea) are clear and massive crimes against humanity as now defined in law,” said the report, written by David Hawk.

Among other abuses, it said, camp officials and guards are regularly able to have sexual relations with female prisoners under circumstances judged to constitute rape or sexual violence.

Prisoners “are subjected, usually for a lifetime, to forced labor under extremely severe circumstances, beginning with the provision of below-subsistence level food rations.”

The high rates of deaths in detention from malnutrition, starvation, exhaustion from forced labor and disease “would likely be deemed by legal scholars and judges to constitute the crime of humanity of extermination, the report said.

A documentary about the plight of North Korean refugees has been nominated for the documentary category of the 40th International Emmy Awards.

Titled “Across Land, Across Sea” in English, the documentary was nominated along with works from the U.K., Germany and Argentina. The documentary has three 52-minute episodes:

The International Emmy Awards are presented to the best TV programs produced and originally aired outside the U.S. and are considered to be among the world’s top three broadcast awards along with Canada’s Banff World Media Festival and Monaco’s Monte Carlo Television Festival. The award ceremony takes place in New York on October 19.

North Koreans shorter than South Koreans due to malnutrition

The biggest hurdle for many North Korean refugees trying to assimilate into South Korean society was not just that they faced a language barrier but that, quite simply, they also looked different. First, they are shorter.

According to UNICEF, because of malnutrition, by the age of 7 there’s already a 4.7-inch gap in height between North Korean and South Korean children — and that difference may reach 7.8 inches.

Another sign is malnutrition. Many young refugees from North Korea have heads that appeared to be slightly oversize on their frames. It was hard to notice, until they are standing next to a South Korean their age — or unless you are South Korean.

”We live under the myth of homogeneity, of oneness here in Korea,” Byung-ho Chung, an anthropologist, told me, ”but these kinds of distinctive physical markings are a scar. The fear is that the scar will become a social stigma affecting many generations to come.”

–Excerpt of an article by Michael Paterniti, GQ magazine 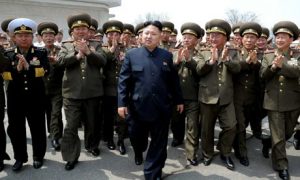 China defends the repatriations of North Korean refugees back to North Korea by claiming that the refugees are simply “economic migrants”.

Writes Suzanne Scholte of the U.S. Committee for Human Rights in North Korea, “Yet as soon as a North Korean crosses the border, they immediately fit the definition of a political asylum seeker because it is a crime against the state for a North Korean to leave the country.

“We know from eyewitness testimony that when North Koreans are repatriated they are subjected to harsh sentences, in some cases they are executed.”