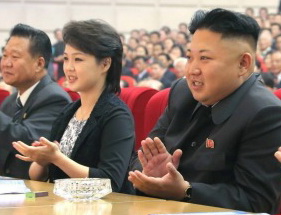 Posted on December 18, 2013 by Grant Montgomery

North Korea yesterday put to rest rumors that its “Dear Leader” has had his wife bumped off. Speculation was rife after dictator Kim Jong-un’s wife Ri Sol-Ju had not been seen for several weeks, this following the dramatic purge which saw ruthless Jong-un order the execution of his uncle Jang Song Thaek.

But yesterday the secretive Communist state broadcast video footage of the stony-faced 30-year-old tyrant arm-in-arm with Ri at a parade to mark Monday’s second anniversary of the death of his father Kim Jong-Il.

Ri, along with Jang’s widow Kim Kyong Hui, are regarded as the power behind the throne – two key women the unpredictable Jong-un turns to for advice.

Even CNN is now asking:  Is she or isn’t she pregnant? And I quote:

Ri Sol Ju, the wife of young leader Kim Jong Un, has not been seen in public for around two months, according to North Korea watchers. A photo released by the state-run news agency KCNA shows her back in public and wearing a long coat that could be hiding a bump. Ri watched a football match and attended a musical concert with her husband Monday to mark the 60th anniversary of the Kim Il Sung Military University.

South Korean media has kicked into overdrive to speculate on whether she is pregnant or whether she was kept out of the public eye as a disciplinary measure for a perceived slight. Local media has claimed she may have fallen out of favor for not wearing a lapel pin of the former leaders, a requirement for adult North Koreans.

“Rumors first came out from officials who attended the same event,” said Kim Yong-hoon, head of the North Korean desk at Daily NK, an online newspaper based in Seoul that focuses on North Korea. “They started questioning and speculating if she was pregnant and it has spread throughout the country and that’s how we heard about the rumors.”

Kim says the interest in whether Ri is pregnant is far higher outside of North Korea than it is inside, according to his sources inside the isolated nation.

John Delury, assistant professor at Yonsei University says this global interest speaks volumes about the way any news about North Korea is handled. “Do we track the last time Michelle Obama showed up?” Delury says. “Our minds are so trained to do this with North Korea that we miss the bigger picture which is there is something new –and by almost international standards we could say more normal — about the way she appears in public.”

While producing a son and heir for a dynastic regime is considered very important, Delury points out “that’s also true for the families of the ‘chaebol’ or business conglomerates of South Korea, for Hyundai and Samsung,” he says. “Even in the U.S. and UK, powerful families are concerned about producing the next generation.”

The wife of North Korean leader Kim Jong-un,  Ri Sol-Ju , has reappeared after dropping out of the public eye for 50 days amid fevered rumors that she was either pregnant or had fallen out of favor.

“Marshall Kim Jong-un, the supreme leader of the party and the people, came to the spectators’ seats, accompanied by his wife Ri Sol-Ju. At that moment, thunderous applause broke out,” KCNA said.

The fact that Kim Jong-un even had a wife was only revealed in July when pictures emerged of a stylish young woman accompanying the new young leader at official events.

A terse statement from Pyongyang’s state television that month confirmed her identity and the fact the couple were married.

Then in early September she dropped from public view just as suddenly as she had appeared.

Her absence triggered speculation that she might be pregnant, while some suggested she was doing penance for failing to wear the lapel pin – bearing the image of one or both of the country’s late leaders – that all adult North Koreans are required to wear.

A photo of the couple at Monday’s musical performance showed Ri, wearing a long coat, applauding as Kim saluted the cheering crowd.

South Korea’s Yonhap news agency stoked the pregnancy rumors by observing that her mid-section appeared swollen. It was not clear if she was wearing a badge under the coat.

The announcement of Kim Jong-un’s marriage and Ri’s media profile mark a departure for North Korea, whose intensely secretive regime has previously kept the private lives of its rulers under wraps.

Ri was described as coming from an ordinary family, with her father an academic and her mother a doctor. She visited South Korea in 2005 as a cheerleader for her country’s squad in the Asian Athletics Championships.

The South Korean news media, which scrutinizes every photo of the North Korean leader, Kim Jong-un, zeroed in this week on one particular photo released by the North’s state-run news agency on Tuesday. It shows Mr. Kim watching an art performance by soldiers during a military visit.

But the photo also showed his wife, Ri Sol-ju, with something most North Korean women have never heard of, much less owned: a Christian Dior handbag.

South Korean journalists did not take long to identify Ms. Ri’s handbag and, assuming it is genuine, its going price in Seoul: 1.8 million won, or $1,600. That is about 16 times the average monthly wage of a North Korean worker in the Gaeseong industrial park, a joint venture between North and South Korea that provides some of the best-paying jobs in the impoverished North.

Some outside analysts even consider her appearance as a sign of potential change in leadership and even lifestyle that Mr. Kim could bring about as a youthful leader who studied in Europe as a teenager. (Recent visitors to Pyongyang, the North Korean capital, reported seeing miniskirts, high heels, Nike hats and Hello Kitty cellphone accessories.)

From a blog article by Choe Sang-hun

Posted on August 1, 2012 by Grant Montgomery

Ri Sol Ju is glamorous, young, and very chic — the freshest and most magnetic of first ladies.

The first impression of Ri Sol Ju is movement — a determined swath cut through space with a flash of red soles. Dark-brown eyes, short black hair, long neck, an energetic grace. No watch, no jewelry apart from Chanel agates around her neck, not even a wedding ring, but fingernails lacquered a dark blue-green. She’s breezy, conspiratorial, and fun.

Her accent is English but not plummy. Despite what must be a killer IQ, she sometimes uses urban shorthand: “I was, like. . . .”

And then there’s her cultural mission: “People tend to see North Korea as missiles and gulags,” she says. “For us it’s about the accumulation of cultures, traditions, values, customs. We have to make sure that we don’t lose that… ” Here she gives an apologetic grin. “You have to excuse me, but I’m a banker — that brand essence.”

Read full article at The Atlantic

In an incredibly understated report, Kim Jong Un’s marital status was confirmed almost as an afterthought by state TV mingled with the news of the opening of an amusement park:

“As a welcoming song resonated, dear respected Marshal Kim Jong Un, supreme commander of our party and people, appeared at the inauguration ceremony together with his wife, comrade Ri Sol Ju.”

Ri was shown smiling while speaking with her husband, her arm tucked closely under Kim’s as they led an entourage of senior military and party officials through the park.

It appeared to be a carefully choreographed appearance aimed at showing Kim Jong Un as a friendly, modern leader, no different from the heads of other countries. It also provided a sharp contrast to the intensely private face his father Kim Jong Il had portrayed during his 17 years in power.

Such public displays of affection aren’t unusual among ordinary North Koreans, but they are a big change for the ruling family and a “shocking” development in a country like North Korea, where first ladies are normally hidden from publicity, said Lee Woo-young, a professor at Seoul’s University of North Korean Studies.

South Korean media reports said Ri Sol Ju is a former popular singer and …. that they married in 2009!

Other recently-published photos show Kim and and a stylish Ri smiling broadly at public events.