The lack of a North Korean sense of humor 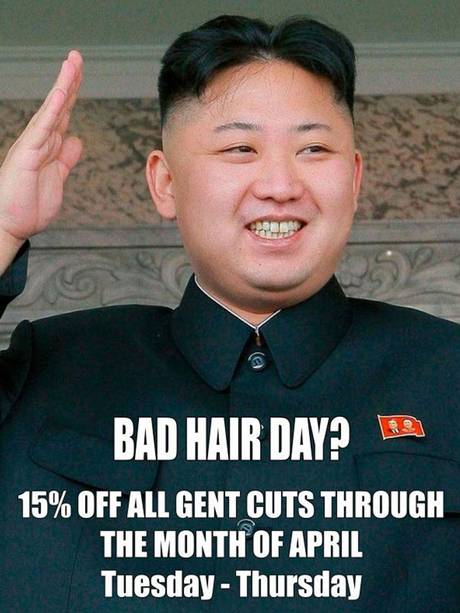 The row between a London hairdresser and the state of North Korea looked set to escalate after the UK Foreign Office confirmed it had been contacted by embassy officials. Diplomats from North Korea had already complained to police and to the shop’s manager about what they describe as a “disrespectful” poster showing leader Kim Jong-un with the words “bad hair day?”.

The Foreign Office said today that it had received a letter from the embassy on Monday, as the promotional poster looked set to spark the unlikeliest of diplomatic rows. Mo Nabbach’s M&M Hair Academy in South Ealing was paid an unexpected visit by two men from the North Korean embassy who started taking pictures and making notes. Mr Nabbach said the men came back later and asked to speak to the manager before ordering him to take the poster down.

Enfield Southgate Conservative MP David Burrowes, who also sits on the all-party parliamentary group on North Korea, criticized the embassy’s stance. “On the one hand their response is laughable,” he said. “But underlying is a more sinister undertone which is played out in North Korea with people being locked up, killed and denied freedoms.”

Mr Nabbach said the two men from the embassy had been “wearing suits and they were very serious”. “It was very threatening,” he added.

Barber Karim Nabbach, 26, yesterday said that staff at the salon did not realize the North Korean embassy was a 10-minute walk away when they put the poster up. He added, “We always put up little offers in the window, it’s harmless. We were just making light of a bad situation in North Korea.”