The long route from North Korea to South Korea

Two days back, a combined force of Thai Navy, police and local Task force came across a group of 15 North Korean refugees during a routine patrol in northern Thailand, as the North Koreans were walking from a Mekong river bank. 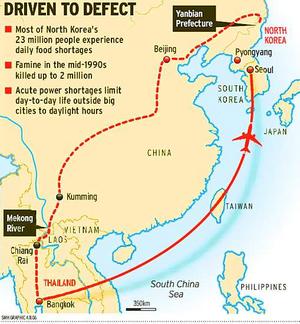 These refugees escape North Korea and enter China where they may stay for a week to 6 months while they gather sufficient funds from various help organizations and then get onto the waiting list. It’s then about a ten day trip down through China and Laos. Then a short overnight 5 hour minivan ride through Laos and then smuggled across the Mekong and into Chiang Khong, where they cross the river.