The mystery of the defector now back in North Korea 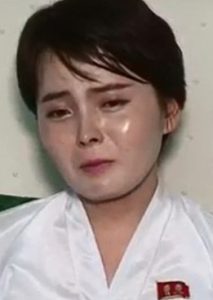 The case of a Korean woman Lim Ji-hyun who defected from North Korea, made a new life for herself as a TV personality in the South and then “returned home” to the communist state three years later has left South Koreans wondering why such people return to the repressive state they once fled.

From her new vantage point in North Korea, Lim has denounced South Korea and TV Chosun, which produced the programs about defectors that she appeared in. Despite that, the South Korean public is still fascinated by her, because of intense curiosity about one puzzling question: Was her return to the North voluntary?

One North Korean defector, Kim Ji-young, who appeared with Lim on the show Moranbong Club, doesn’t think so.

Another Moranbong Club star, defector Kim Ka-young, believes Lim was kidnapped and taken back to Pyongyang against her will. “Why would she go back on her own? Of course she was kidnapped,” said Kim. “Every word she said during that interview sounded disingenuous and fabricated.”

According to Kim Kwang-jin, another defector who now is a researcher at the government-funded Institute for National Security Strategy (INSS) in Seoul, such “involuntary repatriation of North Korean defectors” — particularly from China — is not uncommon. “There are many other cases where North Korean defectors are abducted in China while trying to send money to their families in their homeland,” Kim told VOA.

Kim told VOA’s Korean service that almost everyone …who winds up back in the North was coerced: “Going back to North Korea after living [in the South] is a lot riskier than escaping from there. It’s like running into a fire, carrying fuel.”

This entry was posted in China, North Korean refugee by Grant Montgomery.