Video footage from North Korean state media shows President Donald Trump returning a salute to a North Korean military general during this week’s summit in Singapore, an extraordinary display of respect from a US president to a top officer of a hostile regime. 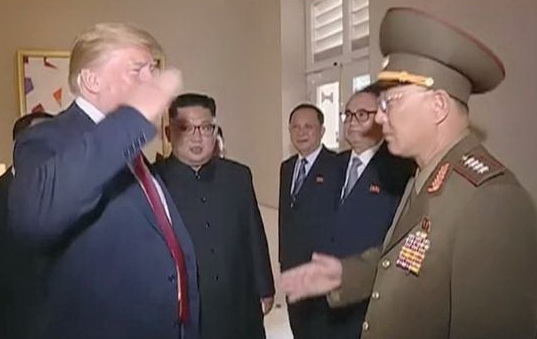 In the military, returning a salute from a military officer of a friendly foreign nation is common practice for US military officers and considered a display of military professionalism. There is no rule that a US president is obliged to return a salute, which is considered a sign of mutual respect.

After Trump and North Korean leader Kim Jong Un walked down a colonnade to shake hands, the pair entered into a room filled with various members of Kim’s delegation. Trump starts to shake hands with those in the room. Upon encountering North Korean Gen. No Kwang Chol, who was in full uniform, Trump first extends his hand, to which the general responds with a salute. Trump then salutes back, extends his hand again and the two men shake hands.

A US official told CNN that Trump was briefed on protocol, which is to not salute military officers from other countries. The White House is viewing Trump saluting as all part of the broader goal that day, which was to show respect to Kim and his entourage.

Retired Rear Adm. John Kirby, a military and diplomatic analyst for CNN, called the moment striking. “They can see a propaganda value here and this is basically them showing the level of deference and respect that Trump has paid to them and to their military leaders,” Kirby told CNN. “It was an inappropriate for him to do from a protocol perspective, but now he’s played right into the North’s propaganda about their legitimacy on the world stage.”