Where in the world is Kim Jong Un?

Posted on September 24, 2014 by Grant Montgomery 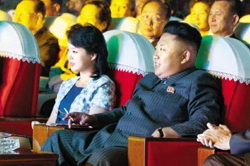 North Korean leader Kim Jong-un has been out of the public eye for 20 days since attending a concert on Sept. 3 with his wife Ri Sol-ju. (See inset photo.)

The North Korean leader appeared in public 17 times in June, 24 times in July and 16 times in August. But his only public appearance in September was the concert.

This has led to speculation that he is ill. In July he was seen on state TV in July with a slight limp in his right leg and again earlier this month limping on his left leg.

Kim is also getting fatter, leading to rumors that he is suffering from stress and symptoms of heart disease, Free North Korea Radio reported Wednesday. The rumors say Kim has been suffering the symptoms since the execution of his uncle Jang Song-taek and over-eating and drinking heavily.

A South Korean Unification Ministry official warned against jumping to conclusions. “In 2012, Kim Jong-un disappeared from view for 23 days and last year for 17 days,” the official recalled. “Of course it’s possible that there is something wrong …”

One reference to “Where in the world is Kim Jong Un?”