Naturalized US citizen arrested for spying in North Korea

A man who claims he is a naturalized American citizen, and who apparently has been detained since October in North Korea on spying charges, has asked the South Korean or US government to rescue him.

Kim Dong Chul, believed to be in his 60s, and who lived in Fairfax, Virginia, said he spied on behalf of ‘South Korean conservative elements’ and was arrested in October. ‘I was tasked with taking photos of military secrets and scandalous scenes,’ Kim told CNN in an interview.

CNN reports that North Korean officials said Kim was a U.S. citizen arrested on espionage charges. (Kim’s US passport is shown below.) 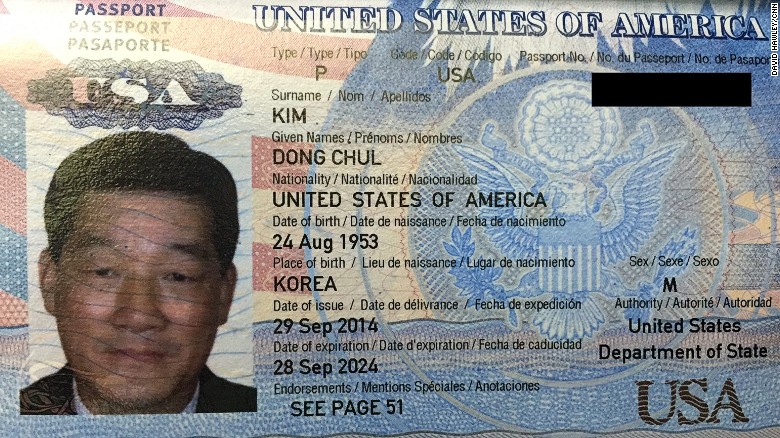 There have been no recent reports either from Pyongyang or Washington of any American having been detained.

Another North American still being held in North Korea is 60-year-old Canadian pastor, jailed for life with hard labor. Hyeon Soo Lim spends eight hours a day, six days a week digging holes in an orchard in a prison camp where he is the sole inmate.

Lim, who came to Canada from South Korea in 1986, is a clergyman known for his caring and compassion. “I wasn’t originally a laborer, so the labor was hard at first”, Lim said in Korean during a Newsweek interview.

While charges against Lim had lacked specifics, the pastor said he believes they stemmed from his continued criticism of the North’s three generations of leaders. “I admit I’ve violated this government’s authority, system and order”, Lim said in the interview.  “I hope I can go home someday”, Lim said. “I miss my family.”