Posted on January 9, 2014 by Grant Montgomery

Dennis Rodman first befriended Kim Jong Un, an avid basketball fan who inherited power from his father, during his first North Korean visit last year and has described the young dictator as a “very good guy.”

On Wednesday, accompanied by his wife, Kim emerged in a stadium in Pyongyang to cheering crowds who for several minutes wished him a long life, stopping only when the leader hushed them. Rodman gave an impromptu speech and then led the crowd in singing “Happy Birthday” to Kim.

After participating in the exhibition basketball game he had organized for about 15 minutes, Rodman got changed and went to sit next to Kim in the audience, where the two spent the rest of the game smoking and laughing together, said Sean Agnew, a tourist who attended the unusual sporting event with Koryo Tours. 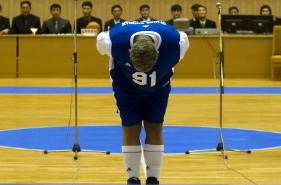 The two unlikely comrades appeared to be getting along famously at the game organized for Kim’s birthday. The young leader, whose exact age is unknown, is believed to be in his early 30s.

If we were to give Rodman the benefit of the doubt …