My dad was a sailor, and he had alcohol problems, but still, I had a happy childhood.

In North Korea, I had read only one novel, which I’d borrowed from a neighbor. It was all torn and there were pages missing, but it was all I had. Years later, then in college in South Korea, I discovered a wonderful Korean literature professor whose way of teaching was very emotional, and I ended up taking three classes with him. The whole time, I was writing down little notes in my phone. I didn’t even know that the notes I was writing were poetry. I was just scribbling spontaneously.

“Even though there is oppression, there were also moments of happiness,
and I don’t have to deny those times.” 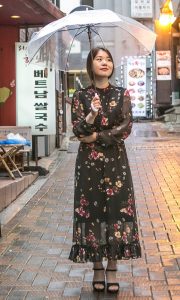 The biggest motivation for me behind writing poetry was missing my sister so much. I was so full of hurt, I was overflowing with hurt, and I had to let it out onto the page. It was a whole new world to me. I felt like each cell in my body was coming to life.

My first book came out in 2015. It’s called “Calling Home.” I was invited onto a TV channel, and I gave poetry readings. That’s how I was selected as a rising poet, and I was asked to contribute to another collection.

A lot of my works are related to North Korea. I have such fond memories of there. Even though there is oppression, there were also moments of happiness, and I don’t have to deny those times. People are hungry and life is hard, but the essence of humanity is the same.