When I was at college in North Korea, I was watching South Korean dramas and other foreign media. I realized that North Korea was so backward, so I decided to escape.

When I got to South Korea, I had to spend a year preparing for college entrance, so I applied to work part time at a call center because I thought it would be easy. But as soon as they heard my accent, they asked me how I thought I could work at a call center. So to make ends meet I started sticking up posters at 4 o’clock every morning, and I worked on a phone assembly line.

Then 2011, I entered university and started studying international trade and Chinese. During my senior year, I did an internship and spent some time in their Beijing office because of my Chinese. 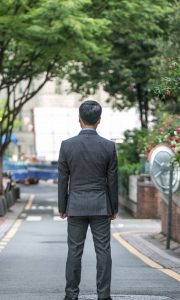 I didn’t know if I could get into one of these big companies, but I had this conviction, so I studied very hard, and opportunities arose like visiting the United States with an entrepreneurship foundation, where I went to New York and Boston, and I even visited Harvard.

When I graduated, I applied to [a large corporation]. I did the entrance exam and went through two rounds of interviews. There were a lot of smart people among the competitors, but I think coming from North Korea and having overcome so many difficulties helped me to get my job. I never hide where I’m from. It’s a big point of pride for me. Now I am a supply chain manager, I’m in charge of bidding tenders. My job is to get the right price.

In 10 years’ time, I want to be back in North Korea, running the office in Pyongyang. Once North Korea opens up, I think there will be a lot of potential for development.