Posted on November 28, 2014 by Grant Montgomery 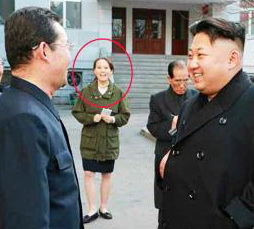 On Thursday, state media said the younger Kim, 27, had taken a senior position in the ruling Workers’ Party, confirming speculation she had moved closer to the center of power in the secretive state. It named her as a vice director alongside the head of the Propaganda and Agitation Department, which handles ideological messaging through the media, arts and culture.

Kim Yo Jong’s power has been likened to that of a prime minister, an unnamed South Korean intelligence source told the Seoul-based JoongAng Ilbo newspaper in April. “All roads lead to Comrade Yo Jong,” the source said.

Kim Yo Jong first appeared in state propaganda in 2012, as state TV showed Kim Jong Un arriving at the opening of an amusement park in Pyongyang. Kim Yo Jong ran from one position to another between ranks of applauding party cadres and generals as if she was orchestrating the event for the new North Korean dictator.

Since then, the smartly-dressed Kim, her hair usually pulled back in a ponytail, has made several appearances with her brother, giggling at state concerts, presenting awards to fighter pilots or riding a white horse.

For Kim Yo Jong, it is her family name and proximity to Kim Jong Un that supersedes any cultural norms. “People who are nominally her superiors most likely defer to her,” said Michael Madden, an expert on the North Korean leadership.

Writing in his 2003 memoir about his 13 years as Kim Jong Il’s sushi chef, Kenji Fujimoto said the late Kim Jong Il had a trusting relationship with his fourth partner (Ko Yong Hui), with whom he had three children: Kim Jong Un, Kim Yo Jong, and their elder brother Kim Jong Chol.

Kim Yo Jong has featured in state propaganda since her brother took over the nuclear-capable country upon the death of their father, in late 2011.

Not much is known about the elder brother, Kim Jong Chol, who was once photographed at the Swiss boarding school all three children reportedly attended.