Kim Kyong-hui (right) is the younger sister of Kim Jong-un’s late father, Kim Jong-il. She and her husband, Chang Song-taek (left) have been central to North Korean politics for four decades and hold multiple titles in government.

When the inexperienced Kim Jong-un became the new leader in 2011, the couple were widely thought to be acting as his mentors. The couple were pictured flanking Kim Jong-un recently when he vowed to keep nuclear weapons as “the nation’s life treasure”.

Chang Song-taek was a trusted friend of Kim Jong-il’s, and rose through the ranks of the Korean Workers Party (KWP) after joining in the early 1970s and was elected to the Central Committee in 1992. But sometime in 2004, he suddenly disappeared from politics and was believed to have been arrested and sent for political “re-education”. Some observers said that despite his close relationship with Kim Jong-il, Mr Chang was considered to have become too influential with too large a personal support base and hence deemed a threat to the established order.

He emerged two years later to be seen regularly alongside Kim Jong-il, becoming more prominent after the leader’s suspected stroke in 2008. In June 2010, South Korean news agency Yonhap described Mr Chang as “guardian of Kim Jong-un”. North Korea watchers often consider him to be the real power behind the throne.

The previously little-known general rose to sudden prominence, replacing the powerful former army chief, Ri Yong-ho. Analysts said at the time that the reshuffle appeared to be an attempt by Kim Jong-un to stamp his authority on the army – and the apparent purge of Mr Ri suggested he is not averse to employing well-worn North Korean tactics to ensure loyalty to the leadership.

Very little is known about Mr Hyon, but he is believed to have been a general since 2010 and is a member of the central committee of the Workers’ Party of Korea. In a clear sign of his growing influence, he served on the committee for Kim Jong-il’s funeral in December 2011. 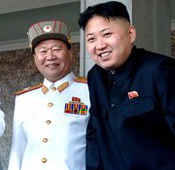 Choe Ryong-hae (pictured to left of Kim Jong-un) is seen as the chief image-maker of Kim Jong-un as a military leader, along with Mr Chang.

Mr Choe has for a long time been known to be close to the Kim family. An economics graduate, Mr Choe became a four-star general in September 2010.

In April 2012, at the major Workers’ Party conference which followed Kim Jong-un’s appointment, Mr Choe was suddenly made a vice-marshal despite having no military background – an unprecedented move in North Korea.

He is something of a toy soldier, says North Korean analyst Aidan Foster-Carter, seldom, if ever, spotted in military uniform but with a high-ranking military role. There is speculation that Mr Choe’s rapid rise could be behind the fall from grace of the top army official Ri Yong-ho, and that the pair may have fallen out. 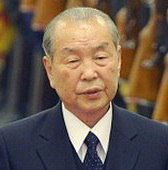 Choe Yong-rim is an elder statesman figure in North Korea. He was described by Yonhap as being a “long-time confidant of the late leader Kim Il-sung”, and he appears to have remained in favor with both his successors.

North Korean leaders have traditionally placed great importance on visiting and being photographed at factories, farms and industrial plants. In recent months, Mr Choe has regularly been seen on such visits, a sign of the trust placed in him and his level of influence.

Kim Yong-nam is the chairman of the presidium of the Supreme People’s Assembly – the highest political machine in the country – and is in effect the head of state, although the position does not in practice exist in North Korea.

The 85-year-old is technically responsible for foreign relations, and has been on several foreign trips, including to the Beijing Olympics in 2008. North Korea analyst Aidan Foster-Carter says those tours show he has some influence and is clearly listened to by the regime, but he is more a survivor than a key holder of power.

2 references to “Meet the political elites of North Korea”